Orville and Kathleen Brunjes loved the people and the communities in which they lived and worked. Kathleen established this scholarship and began awarding them herself in 1987. She made sure funds were provided from her estate to continue their legacy of giving to Alton and Wood River students. Over $110,000 has been granted to over sixty students since 1987. The Alton Educational Foundation began overseeing the disbursement of scholarship funds in 2018.

They met while teaching at Kampsville High School in Calhoun County and married in 1934. They lived in Hartford, IL most of their married lives.

Orville worked in the Wood River-Hartford Elementary School District as a teacher and then principal at Woodrow Wilson School in Hartford. In 1966 he served as superintendent of that district until his death. He actively supported youth programs and in 1959 was awarded the Silver Beaver Award (the highest award a council can give) by the local Boy Scout Council.

Kathy Gourley Brunjes received her college education by attending part-time summer school, night school, and correspondence courses. She was awarded her Bachelor of Science degree from Illinois State University at Normal in 1933, her MA in Education from Washington University in 1947, and later received certification as a State Specialist in Counseling and Guidance from Southern Illinois University at Edwardsville. Tenacity was one of her notable qualities.

Kathleen served students for many years. She began teaching immediately after high school at Spring Bay High School in Woodford County, Illinois, and served eight years at Kampsville High School through 1934. She was a counselor and served as registrar at East Alton-Wood River High School from 1935 to 1944. She was the first counselor ever at Wood River High and taught a year at Monticello College in Godfrey. Then from 1945 to 1972, she served at East Junior High on Washington Ave. in Alton. Her experiences included math teacher, coach of boys and girls basketball, tennis coach, director of the school orchestra, administrative programs, and her greatest joy- counseling. In addition to being active in her church and enjoying bowling, she was a member of the American Association of University Women and the Business and Professional Women’s Club. 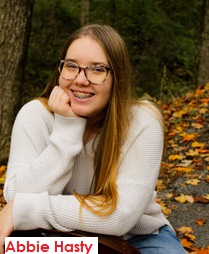 Orville and Kathleen Brunjes loved the people and the communities in which they lived and worked. Kathleen established this scholarship and began awarding them herself in 1987. She made sure funds were provided from her estate to continue their legacy of giving. The Alton Educational Foundation began overseeing the disbursement of scholarship funds in 2018.

Taylor Freer is the daughter of Tim and Carrie Freer. Taylor will be attending Baylor University in Waco, TX. She will be majoring in Biology and plans to attend medical school.

Abbigail Hasty is the daughter of Jeana and Michael Hasty. She will be attending the University of Illinois at Springfield majoring in Political Science. She hopes to attend Law School with the goal of serving as a judge.

Are you interested in setting up a scholarship at the Alton Educational Foundation? If so, contact us for more information!